Therapeutic device may not add benefits to exercise and education 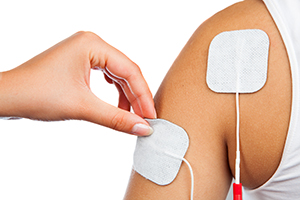 Physical therapists often use device in addition to other treatments

Knee osteoarthritis (OA) is a common condition in which protective cartilage in the knee gradually wears away, causing pain and weakness. Many treatments are available, and high-quality reviews show that exercise and education are very effective. Physical therapists often combine treatments, sometimes including transcutaneous electrical nerve stimulation (TENS), in which an electric current stimulates nerves to alleviate pain. TENS is used for many conditions, but research to support its effectiveness for knee OA is lacking. Therefore, a powerful study called a randomized-controlled trial was conducted to evaluate the additional effects of TENS on knee OA patients when combined with exercise and education.

Individuals with knee OA were recruited, and 224 patients were accepted. Patients were randomly divided into the TENS and knee group, the sham TENS and knee group, or the knee group. All patients participated in the exercise and education program, which consisted of a one-hour session each week for six weeks. The education enhanced patients' abilities to self-manage their condition, while exercises focused on improving leg strength and function and included a daily home-exercise program. TENS and knee group patients were told to use their device at any time before, during or after exercise. The sham TENS group was given similar instructions, but their device was deactivated. All patients were assessed for pain and function before the study and then again three, six, 12, and 24 weeks later.

All groups improve, but the added effect of TENS is questioned

Results showed that patients in all three groups improved in both pain and function throughout the duration of the study. Patients in the TENS and knee group did not improve any more than those in the other groups, and those in the knee group actually improved more. These outcomes suggest that the exercise and education program is effective for reducing pain and improving function for patients with knee OA, but it calls the use of TENS into question. Based on this, it appears that while TENS devices could be beneficial for some conditions, it's not as certain with knee OA. Additional research will help to confirm this and determine the true worth of TENS.

-As reported in the March '14 issue of Arthritis Care & Research

The information in the articles, posts, and newsfeed is intended for informational and educational purposes only and in no way should be taken to be the provision or practice of physical therapy, medical, or professional healthcare advice or services. The information should not be considered complete or exhaustive and should not be used for diagnostic or treatment purposes without first consulting with your physical therapist, occupational therapist, physician or other healthcare provider. The owners of this website accept no responsibility for the misuse of information contained within this website.